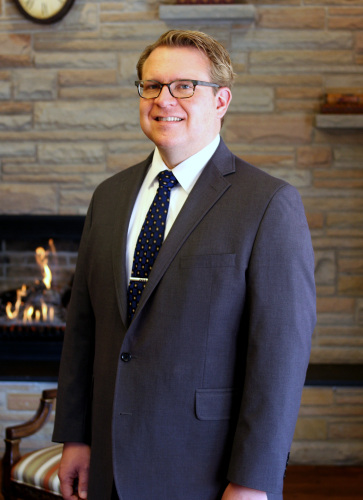 Formerly a funeral director and crematory operator at Davenport Family Funeral Homes and Crematory in Barrington and Crystal Lake for 13 years, Mat purchased KK Hamsher Funeral Home in May 2015, from the Hamsher Family.

Raised in Saint Germain, WI, Mat began his funeral-service career in 1992 at Gaffney-Busha Funeral Home in Eagle River, WI.  While attending college, he worked for Ermenc-McLeod Funeral Home in Milwaukee.

Mat received his bachelor's degree from Wisconsin Lutheran College in Milwaukee and is a graduate of Worsham College of Mortuary Science in Wheeling.

He is a director of the Fox Lake Chamber of Commerce, Fox Lake Lions Club, and Promote Fox Lake.

Raised in Chicago, Ed attended Luther High School North. In 1961 he was working at the First National Bank in Chicago when he married Karen Suckow and moved into the Fox Lake area. Hired by McHenry State Bank in 1967, he worked himself up to Senior Vice President and retired in 1997 when the bank was sold. Ed currently works part-time in the emergency room at Northern Illinois Medical Center. He has been an active member of the Fox Lake Fire Department for 47 years, serving as a paramedic for 30 of those years. Ed enjoys hunting, fishing, skiing, traveling, and spending time with his family.